I’m guilty of being analog. On/off. Black/white. Things in boxes. No mess.

Analogs like me find success in repeating patterns, and as we climb new rungs on the ladder, we trick ourselves into thinking that new patterns replace old patterns — in my case, thinking replaces doing — and revisiting old patterns is a step backwards.

But that’s not how it works. It’s better than that. New patterns revive old patterns. Old patterns weren’t perfect for their place and time — not stepping stones to something better. Old patterns are alpha tests and beta tests. As we grow and advance and climb that latter, we iterate.

It’s true that some doing goes by the wayside, but it’s only the doing that has truly been perfected. Patterns simple enough to master sooner rather than later and leave behind as you climb higher. I’m amazed at how many fewer of these there are than I initially thought. The reality — my reality — is that with so many things I’m good, but not great.

So here’s to doing more and thinking more. We strive for more than armchair mastery. We do our thinking in the trenches.

Nail the order of things. You can be mediocre at everything you do, but if you can manage to do it all in the right order you’ll still come out ahead.

So focus on getting to know your users. Talk to them, interact with them, pay attention when you serve them, and most of all respect them as people. Here are some of the ways you may be doing this wrong:

END_OF_DOCUMENT_TOKEN_TO_BE_REPLACED

One big trend that I really don’t like is happening in Google’s SERPs. Namely, the diminishing need to leave the SERPs.

On the surface, the products and technologies that Google is pushing out the door seem OK – AMPs speed up the delivery of web content, rich snippets offer a smoother UX, and killing the idea of a longhand URL seems innovative. But the more I see of these changes, the more I realize that the end result is a search economy that leaves users (searchers and content publishers alike) stripped of their power to choose the sources they’ll trust.

I’ve had several conversations with other marketers about the decreasing value and increasing complexity of content publishing – particularly when it comes to websites. My observation is that every innovation coming from Google right now is designed to make it easier to kill the idea of having a standalone website, and marketers are so preoccupied with keeping up that they don’t seem to care where Google is trying to take the web.

While I would much prefer a decentralized web, it doesn’t look like I have much power to offer any alternative to marketers or businesses. We’re left with simply doing what Google requires. Asking a question and getting an answer sounds simple and efficient, but soon we may miss the days where that process of finding answers was an exercise in freedom of thought.

Update: Around the time I wrote this post Drift Email launched. This week Drift Signatures went live. I’ve looked at both of these products, and I’m thrilled with the direction. I still stand by my comments below – Conversational Marketing is a strategy and shouldn’t be conflated with a platform – but I’m so pleased to see Drift embracing the conversational ideology across all channels, and I still think they’re the most advanced conversational platform available.

I love what Drift is accomplishing by disrupting the way we think about marketing communications, but anytime a single platform (or category of platforms) appropriates an industry term I start getting nervous. SaaS companies best interests are in mass-adoption, which means appealing to the lowest common denominator. Don’t expect Drift to push “conversational marketing” in any direction that doesn’t win them subscribers.

END_OF_DOCUMENT_TOKEN_TO_BE_REPLACED 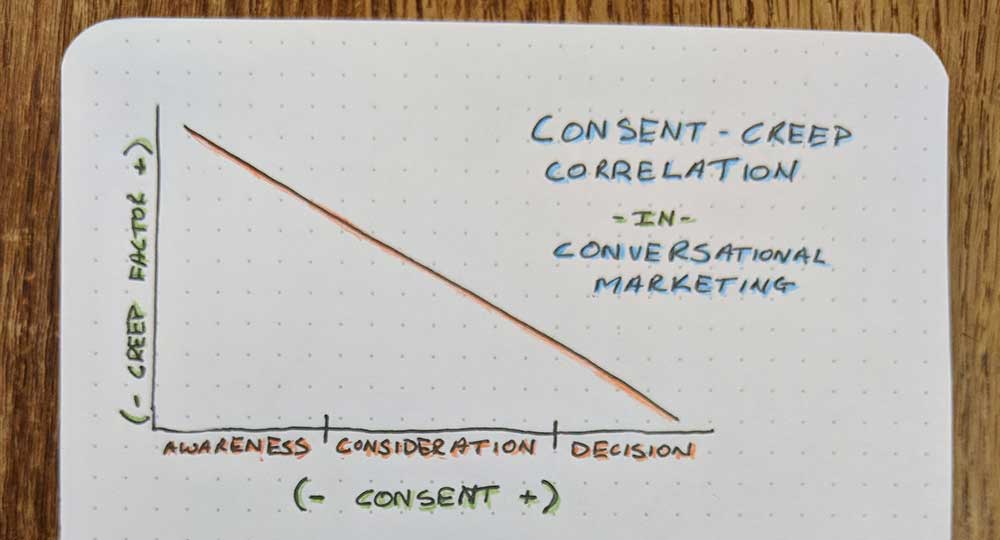 I’ll call this one the Consent-Creep Correlation, but basically it’s this:

The earlier you are in a lead nurturing process, the creepier it is to get personal, individualized attention.

There’s good information on this from InMoment available here, but we can condense the relevant data into a few bullets:

END_OF_DOCUMENT_TOKEN_TO_BE_REPLACED

Remember that movie, Stranger Than Fiction, where Will Farrel’s character believes he’s going crazy because he’s hearing someone narrate his life? That was my experience with The Business of Expertise by David C. Baker.

Admittedly, I tend to dismiss even the best business and personal development books by authors who seem more like out-of-this-world superheros than merely very successful. And if I were to follow that rule here, I wouldn’t even bother with a review. David C. Baker spent his growing up years (until age 18) living in a remote village in Guatemala with a tribe of Mayan Indians. He is an airplane and helicopter pilot, a former high-performance motorcycle racing instructor, and a fine woodworker. He travels and speaks all over the world on the business of being an entrepreneurial expert. If there were ever a man to dismiss as being out-of-this-world, it would be David.

Yet, I will read this book again. Probably within a month. Probably at least once per year. And aside from this review, I will never recommend this book to anyone ever again — not because it’s bad, but because I want it to be a source of secret knowledge that propels me forward. I see this book as an advantage.
END_OF_DOCUMENT_TOKEN_TO_BE_REPLACED