This blog of mine is an exercise in insight, and mostly reserved for things I can’t say on the company blog, so let me be clear about 2 things:

HubSpot’s primary persona is a lowest common denominator, who is not as smart or proactive as a strategist should be.

I am a person who starts by not believing and moves to belief through a series of checks that include evidence, research, experience, logic, etc. So when HubSpot tells me that everything is changing and I need to change too, my first assumption is that they have their own interests in mind first, and mine second or third or fourth.

That’s a safe assumption, and it’s not unfair to think it. HubSpot makes money by selling a relevant platform. They have a vested interest in affecting their own relevance throughout their education initiatives. They don’t peddle lies, but they do kowtow to the lowest common denominator.

Keep that in mind as you drink in your next HubSpot Academy video. You’re getting good [basic] information[, as long as you subscribe to HubSpot’s methodology].

It’s that second part that bothers me.

The HubSpot methodology is brand assimilation, not ground-breaking innovation.

Waypost has been an agency partner with HubSpot for years, and they’ve been good years. Our relationships within the company are great, the opportunities for communication and collaboration are great, and the results have been great. But in 4 years of partnership we’ve gotten to know a lot of other agencies in the same boat, and a common observation is that there’s clearly a lot more nuance and variety to inbound marketing than HubSpot advertises. The HubSpot agencies who are hitting diamond and platinum partner status are the ones who either raise an eyebrow at HubSpot’s latest methodology twist or laugh because they’ve already been doing it for two years. You can apply the boilerplate methodology all day, and do it well, and still get beat by someone who doesn’t give a flying fart about what HubSpot said at last year’s INBOUND conference.

It’s Digital Marketing 101, sponsored by HubSpot – no more, no less – and if that’s all you have, the PhD’s are going to wipe the floor with you. This environment of brand assimilation is great for selling HubSpot and not Marketo or Pardot or Salesfusion, but it sucks for the small-business marketing managers who think they’re getting real insight, when, at best, they’re at the top of the bell curve – a.k.a middle of the pack. 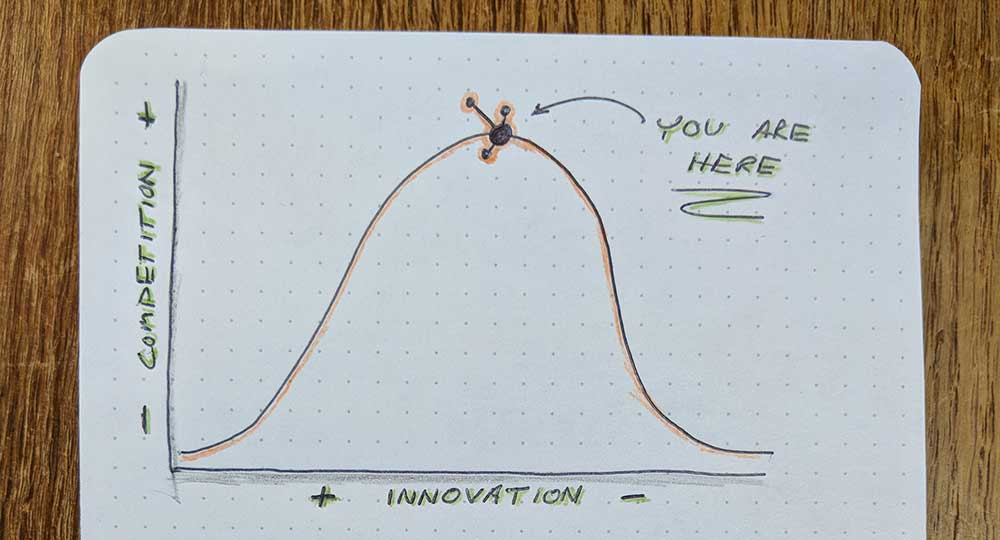 Legitimate marketing strategy is 12-24 months ahead of the most recent release of HubSpot.

It irks me how hard it is to sell this idea. Too many people are content at the top of the bell curve, when they could be front of the pack. It’s not even a budget issue, it’s a convenience issue. If you wait until HubSpot buys the tech and wraps it into a stable release, it’ll obviously be easier to implement (more convenient), but by then you’ve already missed the good opportunities.

It happened with video. It’s happening with chatbots and conversational marketing. It will continue to happen as long as the SaaS marketing teams are controlling page one. The easiest way to get a head start is to pay attention to the acquisitions. HubSpot bought MotionAI on September 20, 2017 and by September of this year their chatbot feature will likely be out of beta and available to the masses.

But legitimate strategists didn’t need an acquisition to figure out that AI and bots are the future of conversational marketing, just like it doesn’t take a genius to figure out that video marketing doesn’t stop with 3 minute explainers or live whiteboard webinars.

The ones in front of the curve are working harder and doing their own thinking. Video marketing 4 years ago was a bear. Today it’s as easy as downloading a browser extension. But the early adopters today end up being the experts tomorrow, and that work pays off.